The international artist from Ibiza Moi Berlanga exhibits at the United Nations Headquarters in Nueva York.

The international  artist  from Ibiza Moi Berlanga, who develops his activity between the island and Miami, will participate this Sunday along with other artists in a charity exhibition for the Scholas Foundation promoted by Pope Francis at the UN headquarters in Nueva York.

Berlanga will participate in a solidarity exhibition with other artists such as Alec Monopoly, Mr BrainWahs, Mijares or Domingo Zapata in which they collaborate with the Scholas Foundation, a global network of educational centers promoted by Pope Francis.

The proceeds collected during the exhibition and sale of the works donated by the artists will go to this foundation to build and equip educational centers in poor areas.

Specifically, Moi Berlanga has donated his work "Flamingolf", where a flamenco plays golf with heels and using another flamenco as a stick. The play represents how in the game, the fun of one can mean the discomfort of another.

Just a week ago, the Ibizan artist Moi Berlanga inaugurated his exhibition "Only art can save us" in the art district of Wynwood, in Miami.

Moi Berlanga began painting as a child. He showed himself to the world on Instagram 25 years later. For him, art is healing, painting heals him, the freedom with which he expresses himself in his works allows him to show himself as he is without masks or characters. A happy and colorful person. Moi Berlanga is guided by the feeling of smiling, working and not criticizing. That to create you must live. It does not matter to fail many times, with only one success he will have the excited hearts of those who fall in love with his characters. He proposes characters, color, nature and animals. Many of them with their eyes closed, breathing and meditating. In a state of calm, serenity and happiness. They already have their Moi Berlanga: Oscar Jaenada, Nacho Cano, Ricardo Darin, Jordi Mollà, Lucas Vidal, Alex González, Antonio Hidalgo, Javier Hidalgo, Pablo Chiapella, Rubén Tejerina, Barto Marí, Quique Fajarnes, Manuel Campos, private collection of the family Rahola Matutes, Miculitzi family collection. He currently has Murals in Wynwood (Miami), OD Group Headquarters, Icarus (Ibiza) and private properties as well as in Miami and Ibiza. He now introduces us to Only Art Can Save Us, which is committed to the idea that art and its expressions can improve the quality of our lives. Thanks to the Miculitzi family for the vision, confidence and belief in my work. Without his support, this dream would only be that, a dream. 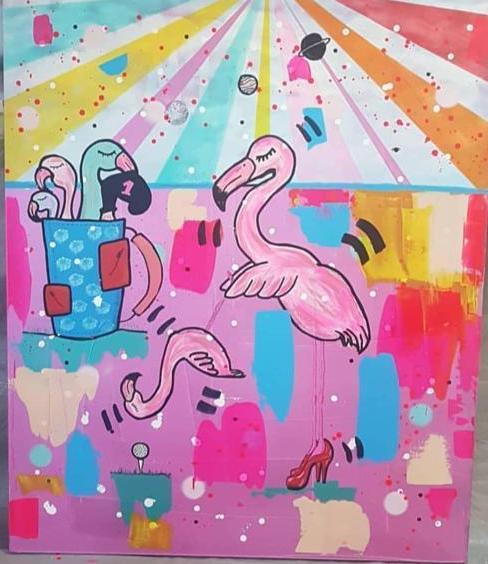 Sold Out
+
ADD TO CART OBAMA - ONLY ART CAN DRESS US